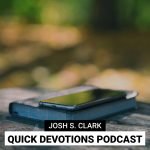 Our Quick Devotion this morning comes from Acts 8:27-38 (NKJV)

27 So he arose and went. And behold, a man of Ethiopia, a eunuch of great authority under Candace the queen of the Ethiopians, who had charge of all her treasury, and had come to Jerusalem to worship,
28 was returning. And sitting in his chariot, he was reading Isaiah the prophet.
29 Then the Spirit said to Philip, “Go near and overtake this chariot.”
30 So Philip ran to him, and heard him reading the prophet Isaiah, and said, “Do you understand what you are reading?”
31 And he said, “How can I, unless someone guides me?” And he asked Philip to come up and sit with him. 32 The place in the Scripture which he read was this:

“He was led as a sheep to the slaughter;
And as a lamb before its shearer is silent,
So He opened not His mouth.
33 In His humiliation His justice was taken away,
And who will declare His generation?
For His life is taken from the earth.”
34 So the eunuch answered Philip and said, “I ask you, of whom does the prophet say this, of himself or of some other man?” 35 Then Philip opened his mouth, and beginning at this Scripture, preached Jesus to him. 36 Now as they went down the road, they came to some water. And the eunuch said, “See, here is water. What hinders me from being baptized?”

37 Then Philip said, “If you believe with all your heart, you may.”
And he answered and said, “I believe that Jesus Christ is the Son of God.”
38 So he commanded the chariot to stand still. And both Philip and the eunuch went down into the water, and he baptized him.